Besides being one of the African countries with a teeming population of white citizens, South Africa is known for its rich culture. From food to music, dance, ceremonies, and even fashion, each tribe has things peculiar to them. Take the Venda traditional attire, for instance.

It’s the cultural clothing of the Venda people of SA. But its purpose goes beyond clothing. Like any garment, Venda’s traditional attire serves to distinguish its people from other South African tribes.

If you’re resident in SA or plan to be there anytime soon, include on your bucket list Venda traditional wears. They’ve been tweaked to include modern styles you can wear to any occasion.

Would you love to try them out? I suppose that’s the reason you’re on this page. And if my assumption isn’t wrong, let’s take a trip to Venda native wear.

What’s the Venda Traditional Attire all about? 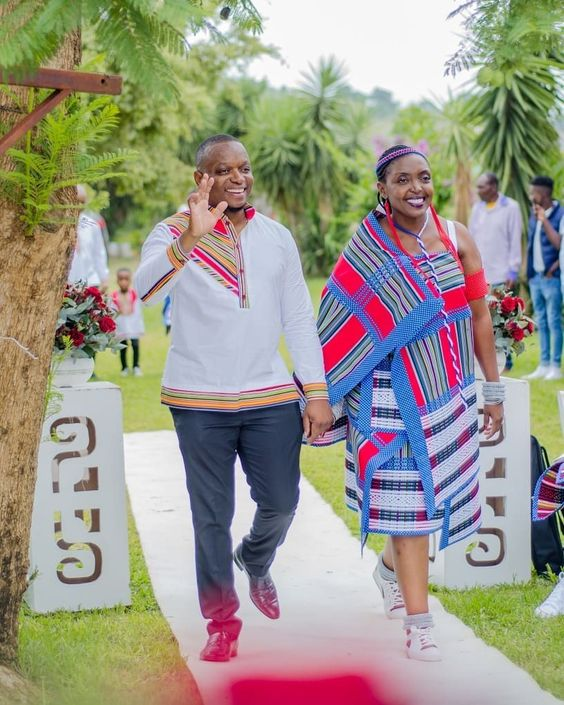 These clothes are the signature cultural pieces of the Bantu people who mostly reside near the South African-Zimbabwean border.

ALSO READ: What to Know About Sotho Traditional Attire

Both children and adults of different don these pieces to show their social status. For instance, while there’s a traditional outfit for married Venda women (Tshirivha), the single ones also have theirs (Maredo).

The Tshirivha is made from goatskin and it covers only the back and front of the wearer. Married Venda women also have a sheepskin piece they wear on special occasions. This piece is called Gwana. It now has a modern look and is no longer made from animal skin but Wenda cloth.

On the other hand, the Maredo for young Venda ladies has narrow strips hanging between the legs over a girdle in front and behind. When a Venda girl begins to develop breasts, they wear a design called Nwenda around their waist and across one arm.

Besides Maredo and Nwenda, these girls also wear other Venda traditional attire such as Shedo or Thuthu, a long apron that covers the entire pelvis, round the ankles and wrists.

Now, for the men…

Back in the day, young Venda men wore Tsindi, a loincloth made from soft skin. The cloth is designed to cover the back and is passed from in between the legs and tied behind. On the other hand, older Venda men wear another version of Tsindi around the waist. This piece is called Ludede and it has a rope to ease wearing. It’s also made from klipspringer, goatskin, or duiker.

And when the weather is cold, Venda men in the past wore a goatskin cloak, Nguvha, over their shoulders.

As civilization has taken over, we now have a blend of native and exotic styles that make up the modern Venda traditional wears. Notwithstanding, the tribe’s cultural heritage and history is still rooted in its contemporary fashion.

Like the popular ankara fabric, Venda pieces have become staples for South Africans who appreciate their root. We see many African men and women rock different Afrocentric pieces made with indigenous Venda fabrics.

The best part is the styles are limitless. While you can make an ensemble with Wenda fabric, you can also mix Venda stripes with a solid-colored fabric.

Similarly, some men don shirts and hang on their shoulders or neck a striped Wenda cloth, This, as expected, adds more deets to their outfit and even creates a style statement.

Furthermore, the modern Venda dress you wear can feature any neckline, length, or sleeves of your choice. Want it as an off-shoulder, V-neck, corset, strapless, etc? Or do you want to don a beautiful dress for your traditional marriage? Not a problem. Just give your tailor a visual reference and she’ll do justice to your Venda fabric.

In addition, there’s something unique about materials. They come with colorful patterns that set you apart from the crowd and give you the recognition you deserve as you identify with the Venda heritage.

Want some inspo for your next Venda traditional attire look? Feast your eyes on these we’ve curated for you.

Would you like to read more interesting stories that’ll help you become better at dressing up?

Writing has always been a part of me. From writing stories as a young child to studying Communication Arts in the university, it has always been more than a medium of expression to me.

And then one day, I found myself toeing the path of an entrepreneur and becoming a fashion enthusiast. This made me develop an interest in content marketing and copywriting which I've been chasing alongside my fashion career.

That aside, when I'm not sharing style articles, selling with stories, or sketching fashion-forward pieces for Ria Kosher, you'll find me telling wild stories that always come with a twist.

7 Tips To Naturally Look Stylish While Supporting A Casual Appearance